When I was talking about my Macintosh SE/30 in the previous article, I wrote:

The SE/30 is the most powerful and expandable of the Compact Macs I have, and I plan to do what I can to keep it in operation. At first I thought I had no useful hard drive substitute, but then it occurred to me that since my Quadra 950 isn’t currently working, I could transplant the Quadra’s internal hard drive (a 400 MB unit) into the SE/30, so I can still use the SE/30 and put an otherwise idle hard drive to work at the same time. A bit of a win-win situation.

Yesterday I did the hard drive transplant, and the outcome was, well, unexpected to say the least. But I think I’ve learnt something that’s worth sharing.

Here are two photos of the hard drive that was in my Quadra 950:

It’s a 400 MB Seagate ST1480N manufactured in 1991 at the latest. This drive has the same imposing size as the 40 MB Quantum ProDrive in the Macintosh SE/30, but I had to be a bit creative when mounting it on the drive shelf, because the side holes were located in different places and I couldn’t insert the screws in the same way as the previous Quantum drive that was inside the SE/30. Long story short, the procedure took me longer than expected, and when I finally reassembled the Macintosh SE/30, connected the mouse and keyboard, and connected the Mac to the mains… It didn’t turn on.

My first thought: Unbelievable… Is the power supply gone? Now? I was really bummed, for that was surely the worst timing ever. I honestly wasn’t blaming the hard drive because in all these years dealing with vintage technology (and back then, when it was current), I had never encountered an instance where a drive was preventing a Mac from even turning on. And I was sure I didn’t touch anything on or near the power supply circuitry. Still, there were no strange smells coming from the Mac, and that was kind of a positive sign. I opened up the SE/30 again, removed the hard drive, closed the SE/30, flipped the power switch again… And it booted just fine.

It was the drive, then. But how could that happen? It really was a first for me. Intrigued, I inserted the drive in the external SCSI enclosure I keep handy, and guess what? It didn’t turn on either (the power LED was just flashing, and no sounds came from the enclosure). Maybe there was something to change in the drive’s jumper configuration, but a quick check revealed that all was OK in that regard.

On a hunch, I went digging in my personal archive of Apple Service Source Manuals in PDF format. There was a document, downloaded from the Web not long ago, with the promising title Hard Drives. I opened it, and I found something interesting in a section called Drives in Quadra 900/950: 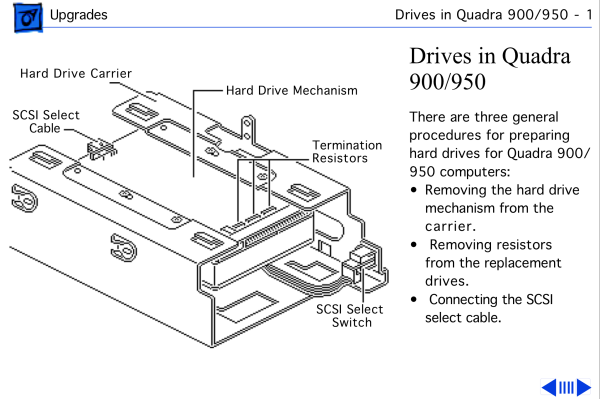 As you can see from the two figures, it appears that you have to ‘prepare’ a drive to be used inside a Quadra 900/950, by removing the terminator resistors. If you look at the second figure, those terminator resistors can be reapplied in case the hard drive has to be repurposed in another Mac or external enclosure (at least on the 400 MB model). I’m out of luck, though, because the 400 MB Seagate drive I have here was either part of the stock drives my Quadra 950 originally had, or it was prepared by the Quadra’s previous owner.

The bottom line is that, in its current configuration, I can only use this hard drive in my Quadra 950 and nowhere else, and the Quadra isn’t working at the moment. That’s disappointing, and also a waste, since the drive works — well, it worked the last time I used the Quadra.

If you’re parting out a Quadra 900 or 950, keep this in mind in case you’d like to use one or more of the Quadra hard drives in another Mac. You also might acquire a Mac that doesn’t turn on: disconnect the hard drive and try turning the Mac on again. Maybe the previous owner put a drive that came from a Quadra thinking that it just was interchangeable. Not a likely scenario, but it’s rather quick check to perform, just in case.

This is what I’ve been able to ascertain from my tests and (limited) research, and I hope it helps. But if something I wrote is incorrect, or your experience is different, please let me know. Thank you.

5 thoughts on “Careful with that Quadra drive”