This does not aim to be a step-by-step tutorial, although you could definitely use it to set up such a connection, provided you have all the necessary hardware and software bits. These last two weeks I finally managed to connect my Newton MessagePad 2100 to the Internet via Bluetooth, and I just wanted to put together all the information for future reference. The essential steps to set up the connection, on the Mac side and the Newton side, are all Steven Frank‘s work. He posted the result of his efforts on the NewtonTalk mailing list four years ago, and subsequently in the WikiWikiNewt. I am reposting those instructions here, but also starting from the beginning, as they assume that you already have the right hardware and that you’ve already installed all the necessary software packages and paired the Mac and the Newton via Bluetooth.

First and foremost: it’s complicated. Not impossible, but not a user-friendly process, either. Few Bluetooth PCMCIA cards work in the Newton, and those that work do not seem readily available. But, if you do own such a card and you can easily connect your Newton to install all the packages needed to use Bluetooth, you should try this method of wireless connection to the Internet with your Newton. I prefer it over using a Wi-Fi 802.11b card because it’s less battery-hungry. The downside, of course, is that you are limited to your home network since you’re using the Internet connection shared via Bluetooth by one of your Macs, while with the Wi-Fi solution you have more freedom of movement and you could theoretically connect to the Internet from a public hotspot. I say theoretically because all the Wi-Fi cards supported by the Newton have limited encryption abilities — WEP — while most public and office access points nowadays use wireless WPA encryption.

Anyway, I can say I’m quite happy I’ve managed to connect my MessagePad this way. Of course my primary use is not browsing the Web on the Newton — despite some great software it’s still a very crippled experience — but reading some RSS feeds and checking email, definitely a more rewarding experience.

On the Newton side, you’ll need a MessagePad 2000/2100 or an eMate (although I’m not sure if you’ll get a good result performance-wise). As for the Bluetooth card, since you’ll have to download and use Eckhart Köppen’s Bluetooth software (Blunt), you are limited to the few options that have been tested and proven compatible. In the Hardware Compatibility section of Blunt’s page, Köppen writes:

Not working is the following hardware:

I own probably the best Bluetooth card of the group, the PICO Card, purchased four years ago. Here are some photos:

When inserted, the card is not flush, the whole transparent green section sticks out, but it doesn’t really bother me:

Activity is clearly indicated by a LED inside the green section.

I have installed Blunt (not Blunt 2, since it’s still in alpha) and all related packages mentioned in the Blunt page, that is, the NIE Nitro & Blunt Support, plus Nitro, Neo, IC/VC (this is for iCalendar and vCard import/export, not really needed for Internet connection via Bluetooth, but I figured it was a nice addition to have), and then Courier (Web browser), Raissa (RSS reader), which in turn need NHttpLib and ntox. All these software packages can be retrieved starting from the main page of Eckhart Köppen’s 40Hz site. As the page for Nitro will remind you, you’ll need to download and install the patched NIE Modem support module to obtain mobile Internet over IrCOMM.

For the uninitiated, NIE stands for Newton Internet Enabler and it’s a series of essential packages that should reside on the original floppies that came with your Newton, if you bought it in the 1990s or second-hand from someone who sold you all the original accessories. Otherwise, you can download it from this page on unna.org (UNNA is the United Network of Newton Archives). Before installing Köppen’s software, you should install NIE in your Newton’s internal store.

To give you a visual summary, here is a screenshot of all the extensions installed in the internal store of my MP2100: 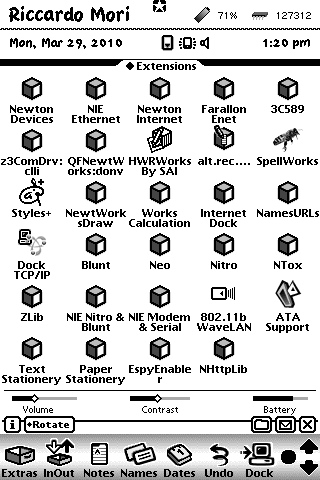 Of course, you don’t have to install all this. The essential packages for the present discussion are Newton Ethernet, Blunt, Neo, Nitro, Ntox, NIE Nitro & Blunt, NIE Modem & Serial, NHttpLib.

Text Stationery and Paper Stationery are two extensions needed by Mail V, the excellent software I use to handle email on my Newton.

Once installed all the aforementioned packages from Eckhart Köppen’s site, you will need to configure Bluetooth on the Newton and pair it with the Mac. I simply followed Köppen’s instructions outlined in the Blunt page. In the preferences for the Bluetooth Setup app (tap [i], then Prefs), my settings are as follows:

I paired my MessagePad 2100 with my PowerMac G4 Cube (after plugging a Bluetooth USB adapter in the Cube). It’s definitely a trial-and-error process: in my attempts, I noticed I was more successful when initiating the procedure from the Newton using the Pair and Get Services commands in the Bluetooth Setup:

It’s important to ‘Get Services’ because otherwise the Bluetooth connection via serial port you’ll setup later will not work. You’ll notice that sometimes, even when everything is set up correctly, the Newton will lose the ‘Modem Port’ and ‘OBEX Port’ information, showing ‘None available’. In that case, just tap Get Services while keeping the Newton in range of your Mac, and all will be fine:

That ‘Name: Q-bert’ is the name of my G4 Cube on the home network.

The following part (in italics) was written by Steven Frank in 2006, and it’s the core of the matter:

It is assumed that you already have worked out the kinks in your Newton Bluetooth setup. You should be paired with the Mac, and have done a service discovery. Make sure you select the Mac’s Serial Port service in the Newton’s Bluetooth Setup (there was only one in my case).

Next, you’ll need to go to Terminal on the Mac, and carefully enter these commands:

(Note the “en1” here. If your Mac is connected to the internet using AirPort, use en1. If it’s connected using Ethernet, use en0 here instead.)

(I’m not sure this has to be done twice. One site I was reading suggested it.)

This starts a PPP server on the Bluetooth-PDA-Sync serial port. Note the IP address here. I’ve used 10.0.1.111. This will be the address assigned to your Newton.

This can be anything you like, but it should be a valid IP address for your LAN. If you use, for example, 192.168 addressing, you should use a 192.168.0.x address instead. Make sure it’s not an address that’s in use by something else!

Now, you need to set up an internet connection on the Newton side! Whew!

Create a new Internet Setup called whatever you like.

Protocol: PPP
Configuration: Manual
User ID: [none]
When closing, disconnect: [your preference]
Local IP Address: (whatever IP address you used in the pppd command above!)
Gateway/Router Address: (the IP address of the machine that’s sharing its connection — in my case, the Mac. NOT the address of your actual router!)
Primary DNS: [an actual working DNS address] (Using 0.0.0.0 doesn’t seem to cut it.)
Secondary DNS: [optional, up to you]
Domain Name: [none]

Now, cross your fingers, and initiate a network connection from the Newton. With a little luck, it should connect to the PPP server running on your Mac, and get online.

When you are all done, and you want to turn off the Internet sharing on the Mac, try the following commands:

I have followed Frank’s method to the letter and it worked. Not after a few attempts, though. At first I started getting error connections and the Newton seemed unable to negotiate a PPP connection. I turned off Internet sharing with the Terminal commands listed above, restarted the Cube and restarted the PPP server on the Bluetooth-PDA-Sync serial port. I kept having problems, until I discovered that I had some old connection profiles in the Newton’s Internet Setup (located in Extras > Setup). I deleted every other profile that wasn’t the Bluetooth profile created as per Frank’s instructions and all went well.

Some other things to remember:

So, Internet on the Newton…

Just a couple of screenshots to give you an idea. My Inbox using Mail V: 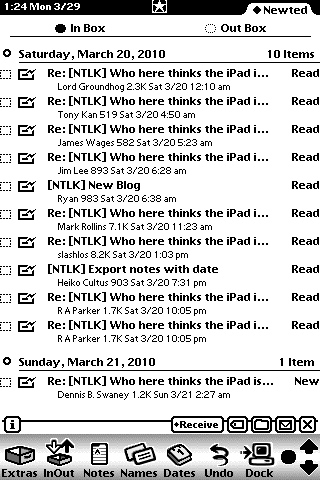 I hope this information can be useful to someone else. I tried to write this as clearly as I could, considering the many steps and convolutions, but feel free to ask questions and share your doubts or difficulties. I’ll try to help you out as much as I can.