Christian is a reader of this blog who first contacted me when I complained that the internal hard drive of my Power Mac G4 was failing, and very generously sent me two 80 GB hard drives so that I could upgrade my system. (Unfortunately now the Power Mac G4 is not working at all, very probably due to a bust power supply unit).

The other day I received another package from him:

For little more than the cost of shipping, Christian was so kind as to send me a very nice Mac mini G4. It’s a first-generation PowerPC mini (introduced in January 2005, discontinued in February 2006), but it’s the high-end model, with a 1.42GHz CPU, built-in AirPort Extreme and Bluetooth, 80 GB hard drive, and a SuperDrive that can burn CDs and DVDs. It comes with 512 GB of RAM, and Christian also sent me the little grey box with the original Mac OS X 10.3.7 install disc and — quite useful — the Mac OS 9 Install Disc. As he later informed me via email, this is not a bootable installation disc, but provides a complete Mac OS 9 installation in various languages, to be used with Mac OS X’s Classic Environment. It’s handy nonetheless, especially when you need to quickly install/reinstall Mac OS 9 on a PowerPC Mac with Panther or Tiger. 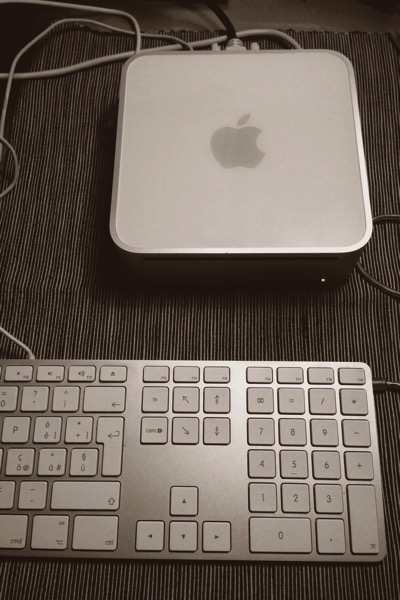 After unboxing the mini, I searched for the various bits and pieces to set it up. The mini has a DVI video port, and luckily my 17-inch Eizo FlexScan S1721 display has both VGA and DVI connections, but it took me a while before finding the cable (the display was previously connected to the Power Mac G4 via VGA). Once ready, I booted up the mini and I was quickly presented with a standard, fresh installation of Mac OS X 10.3.9. I had forgotten Panther came with games like Nanosaur 2 and Marble Blast Gold, both still very fun to play. It also came with AppleWorks and, among other things, a copy of Zinio Reader. It was probably common to include a full digital magazine for demo purposes; still, I was very happy to see it was the complete December 2003 issue of Macworld!

Leafing through the magazine was a real blast from the past — for the subjects discussed, the ads for software and hardware products, and so on and so forth.

I’m truly grateful to Christian for sending me this Mac mini. I was impressed by its general snappiness under Panther, especially app launch times. It’s crazy that many of them launch just as fast as on my MacBook Pro with OS X 10.11.6 and a solid state drive. Today I’ve updated the mini to Tiger, and I don’t intend to install Leopard before at least putting 1 GB of RAM in the machine. I still haven’t decided the main task to assign to this new entry in my humble collection, but it certainly won’t be left gathering dust. Once again I’m reminded of how much compact, versatile, and powerful the Mac mini can be, and having neglected this product line since 2014 is just criminal on Apple’s part.

One thought on “Added to the collection: Mac mini G4”