Among the various goodies Richard donated me there was an Apple-branded Comm Slot Ethernet card (Part № 820-0607-A), which I hoped I could attach to my Colour Classic to bring Ethernet connectivity — and therefore Internet — to my favourite compact Mac. Now, the original Colour Classic motherboard doesn’t have a Comm Slot interface, its only expansion comes in the form of a PDS slot. Luckily, years ago I also acquired the motherboard from a Macintosh LC 580, which fits perfectly in a Colour Classic and makes for a nice overall upgrade (it has a Motorola 68LC040 at 33MHz CPU versus the original 68030 at 16MHz of the Colour Classic, and the RAM can be expanded to a maximum of 52 MB instead of the meagre 10 MB of the original motherboard). The LC 580’s motherboard also sports a Comm Slot interface, and the aforementioned Ethernet card can be installed without problems [Update: It’s actually a Macintosh LC 575 motherboard; see my clarification]:

The first snag I encountered was right when I attempted to insert the motherboard with the attached Ethernet card back inside the Colour Classic. The top edge of the card, in fact, collided with a piece of plastic inside the Mac’s chassis that helps to keep the cables of the hard drive power connector in place. I took measurements and, not without difficulty, managed to cut away exactly where the plastic was blocking the card’s passage. Once firmly inserted the motherboard, I turned the Colour Classic on. The Mac booted normally, but there was no video. Suspicions fell immediately on the new card. Since the system had no way of recognising it, I thought, perhaps it defaulted to thinking that a video card was inserted in the Comm Slot, so it shut down internal video and expected an external connection. I had to make the system recognise the card.

Fortunately I had my copy of Apple’s Network Software Installer 1.5.1 on a floppy disk, which updates AppleTalk to version 58.1.5 and installs the most updated versions of a series of network extensions and drivers. I turned the Mac off, removed the card, turned the Mac on again, inserted the floppy and launched the Installer. After a few moments, AppleTalk was updated, the Apple Ethernet CS driver and related extensions installed (the following screenshot comes from a previous attempt, before I updated to AppleTalk 58.1.5): 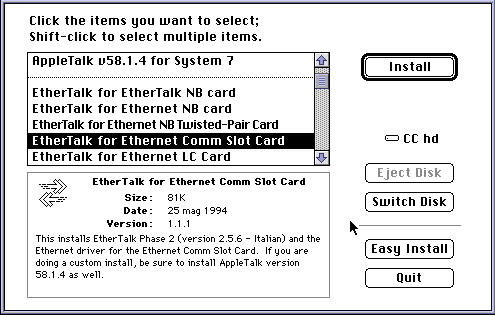 To see if everything worked, once again I had to turn the Colour Classic off, remove the motherboard, install the Ethernet card, reinsert the motherboard and turn the Mac on. This time there was video, and the Mac booted normally.

Another good sign was when I connected an Ethernet cable from my router to the Colour Classic: the LED above the port turned on (that didn’t happen when I first attempted an EtherTalk connection between the Colour Classic and the PowerBook 1400). At this point it was merely a matter of configuring MacTCP: 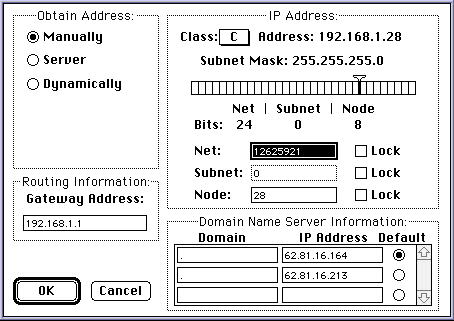 The easiest way to set things up in MacTCP is to do a manual configuration. I did things right thanks mostly to two useful resources: Vintage Mac World’s Old Macintosh System Software and TCP/IP page, and the fantastic Classic Mac Networking page (scroll down until you find the MacTCP section). On this page in particular was a really useful clarification:

It is a common mistake to associate the “Server” mode of MacTCP with “DHCP Server”: this is not the case. Server mode is used with hardware MacIP routers like the GatorBox which assign the client a specified IP address from a pool of IP addresses, or with PPP which does a somewhat similar affair.

So I simply selected Obtain Address Manually, specified a Class C Address in the IP Address area, and entered my provider’s DNS addresses in the Domain Name Server Information area.

At this point, the only thing that was missing to check if the connection worked was a browser. On another floppy I had a copy of one of the earliest Mac browsers, Samba (MacWWW). I installed it and launched it. It threw some errors because it attempted to load pages at the old CERN website that are no longer at the original addresses, but once I entered a valid URL (I figured the afore-linked page at Vintage Mac World was simple enough to be loaded correctly), the webpage loaded almost instantly. I had to share my triumph:

Yes! I managed to bring Internet to the Colour Classic. That is MacWWW 1.03 open at http://t.co/64cyKAV9Xn pic.twitter.com/j0ym5QANQ3

But MacWWW 1.03 is indeed a very old browser, and today’s Web, unless you really know where to look, is too complex for this browser to load pages properly without throwing a bunch of errors. The day after I found a slightly newer browser in MacWeb 2.0. After installing it, and pointing it to the same Vintage Mac World’s webpage, the result was definitely prettier:

This browser, like MacWWW, can’t handle secure connections and the like, but at least is capable of loading embedded images in HTML pages correctly. The overall responsiveness is remarkable, considering the age of the hardware and the software involved.

I’m so happy that I’ve finally managed to bring the Colour Classic online. Not that I’m planning to browsing the Web much on this machine, but now that I know that it can access the Internet, I’m ready to move on to the next step, which involves configuring an email client and an email account, and even an FTP client (I’m thinking an old version of Fetch), so that I can exchange files with the Colour Classic via my own server if need be.

6 thoughts on “Finally: bringing Internet to my Colour Classic”