The first part of the task to restructure my home network — where I put a PowerMac 9500 in place of a Quadra 950 to create a bridge between modern Macs and vintage machines — told the vicissitudes resulted from an unfortunate setback (two internal SCSI hard drives both dead on the same day). Reinstalling Mac OS 9.1 on the surviving internal hard drive of the PowerMac, as my exhausting story showed, has been far less trivial than expected, and when I finally succeeded, the first part of the story (and post) closed with a last catch:

I disconnect everything and restart the PowerMac 9500. The system loads correctly, but the Mac is suspiciously slow. Twelve minutes from the happy Mac icon to the fully loaded desktop are indeed too much. […] Starting with extensions off everything works fine and the PowerMac is quite reactive, I’d say even more than before. The problem is obviously one or more extensions, or even a conflict amongst them. Perhaps by not installing Mac OS 9.1 directly on the PowerMac and instead using a Titanium PowerBook, some components might have been added that trigger a rejection in the PowerMac. Now starts the Hunt For The Evil Extension, in pure pre-Mac OS X style, and if the topic has entertained you so far and was fun to read, I’ll let you know how it goes.

Now, I don’t know whether the topic was entertaining and fun to read or not, but since I always like to get to the bottom of things, here’s the sequel of my adventure in vintage.

Before practicing the infamous “take away extension 1 / restart your Mac / put extension 1 back, take away extension 2 / restart your Mac / etc.” dance (long-time Mac users surely remember it as one of the most tedious and quite un-Mac-like experiences ever), I wanted to try to better understand that strange slowness of the PowerMac 9500 at startup. After a more careful analysis, the phenomenon was as follows: the whole boot process was taking place as if it were in slow-motion, with the extensions loading one at a time with a considerable pause between one and another. When the desktop was finally loaded, the entire graphical interface reacted to mouse clicks and keyboard input with great delay, in such a way as to make the Mac look frozen. (A similar scenario in Mac OS X would occur if, for whatever reason, a process could manage to suck 100% of CPU resources and to choke the CPU to the point of severely affecting the speed of the mouse pointer). In short, the Mac seemed so busy to handle something behind the scenes, that was not responding to external stimuli. I couldn’t hear any crunching or grinding activity from the hard drive (and this 500 MB unit is otherwise obscenely noisy), so I thought it could be some memory-related issue. After a few minutes in this state, however, the Mac ‘regained consciousness’ to be its old snappy self as it had always been, and everything was working smoothly. No errors, no unexpected nasty messages.

Perplexed, there wasn’t much to do but start the aforementioned ‘extension dance’, opening the Extension Manager control panel and starting to turn off unnecessary components (like FireWire Support, the numerous ATI extensions, the OpenGL related components, and so on). After every restart the situation did not change: Mac in slow-motion until the desktop was fully loaded, then a handful of minutes spent in a state of semi-dizziness, and then again back to being ‘snappy Mac’. When even selecting the “Mac OS 9.1 base” extensions preset (which is proposed as a default set to use in case of conflicts with third-party extensions) the PowerMac continued to behave in this strange way after a restart, my patience was gone. (Consider a quarter of an hour for each reboot, multiply it by at least a dozen reboots and you start getting the picture of how much time you can lose with this kind of troubleshooting). It was crucial to install Mac OS 9.1 directly on the PowerMac, without workarounds and shortcuts.

So I connected the glorious SyQuest 5200C SCSI unit to the PowerMac and inserted a 200 MB cartridge with a clean installation of Mac OS 7.6; I restarted the Mac from this drive and deleted the Mac OS 9.1 System Folder on the internal volume. The idea was to try to put the Mac OS 9.1 CD-ROM back in the PowerMac’s optical drive and retry the installation. However — blame it on my fatigue — I forgot that the CD-ROM wouldn’t be recognised by the older drivers of Mac OS 8 and earlier versions. So I found myself back to square one once again, with a PowerMac only bootable from the SyQuest cartridge with Mac OS 7.6. I absolutely did not want to pull everything out, start disassembling the PowerMac 9500, removing the hard drive, etc., yet another time, therefore I thought about using again the PowerBook 5300 as a conduit between the Mac OS 9.1 CD-ROM (inserted in the Titanium PowerBook G4’s optical drive and shared from there) and some other external device where to install at least a minimum Mac OS 9.1 System Folder, in order to start the PowerMac from there later. Having the SyQuest at hand, I looked for a cartridge with enough free space, but in vain.

The situation was getting grotesque at best, but the idea of using another vintage device proved successful. In fact, I managed to install a minimum Mac OS 9.1 installation on a magneto-optical disk, resurrecting an old MaxOptix SCSI drive and a 652 MB double-sided disk (300+ MB per side). With Mac OS 9.1 installed on the magneto-optical disk, I connected the MaxOptix unit (it weighs as a Macintosh SE, by the way) to the PowerMac, restarted from there, inserted the Mac OS 9.1 CD-ROM in the PowerMac’s optical drive and finally performed a full installation of OS 9.1 on the internal hard drive. I then copied Vine Server for Mac OS 9 and placed it in the Startup Items folder, and at long last I managed to see the PowerMac 9500 from the 12-inch PowerBook G4 via Screen Sharing: 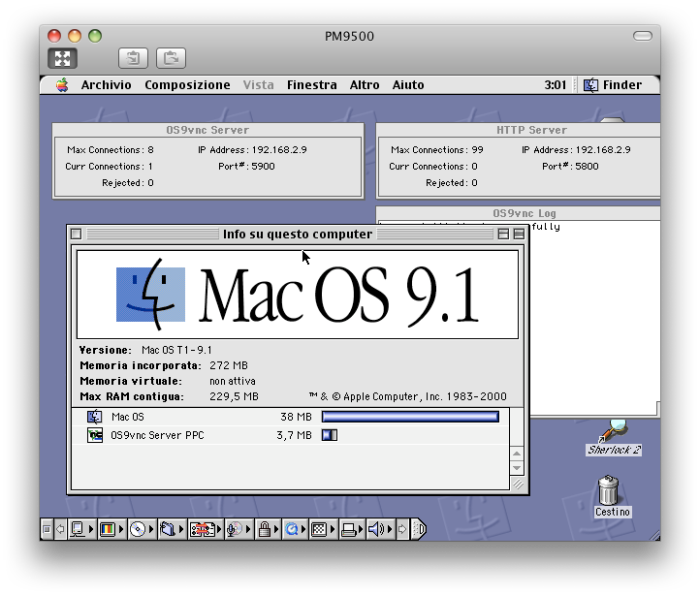 Since the screen resolution is set at 640×480 (it’s what the 14-inch CRT Macintosh Color Display can offer, apparently), the window is really small. I thought about some way to gain more screen estate, and I recalled an application I had tried years ago: SwitchRes. To my surprise, after a quick Web search I’ve discovered that the application is still supported, and there is a version for Mac OS X (SwitchResX) and for Mac OS 9 and earlier (SwitchRes 2). I downloaded SwitchRes 2.5.3, passed it over to the PowerMac and tried it. You have to be careful with this program, because you can easily try the wrong screen resolutions and find yourself with a black screen and the only thing you can do is a hard reboot. Fortunately, since I was controlling the PowerMac with the PowerBook G4 via VNC, I was still able to see the PowerMac’s desktop on the PowerBook even at higher resolutions (800×600 in the image below). 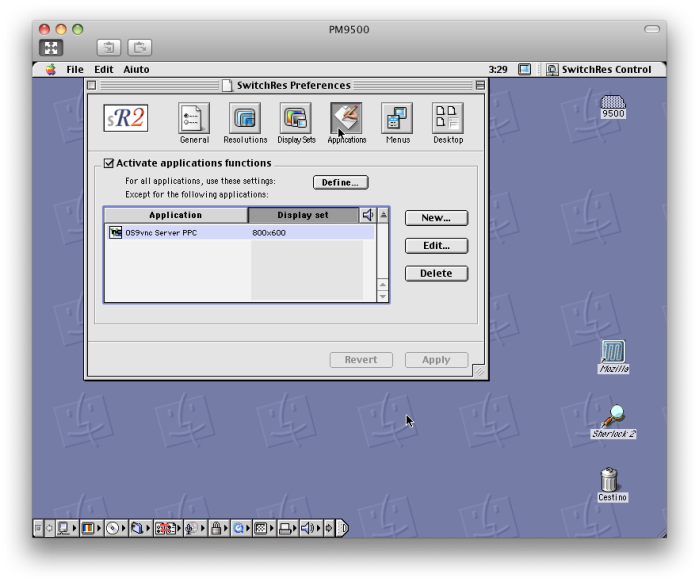 I registered SwitchRes 2 (I remembered well, it is a great program) and having now finished with the PowerMac 9500’s configuration, I went to see if the 4 GB external hard drive with Rhapsody Developer Release 2 was still as I left it almost a year ago. I connected it to the PowerMac but of course it wasn’t possible to restart directly in Rhapsody, since with the death of the first hard drive I had lost the Multibooter. This application/control panel can recognise Rhapsody-formatted volumes (Rhapsody doesn’t use the Mac HFS or HFS+ filesystems, but UFS, a UNIX filesystem) and you can select them as startup disks (provided, of course, there is a valid Rhapsody system installation on them). Therefore, I inserted the Rhapsody DR2 CD-ROM and copied Multibooter to the hard drive. I launched Multibooter, and the external drive with Rhapsody was immediately recognised: 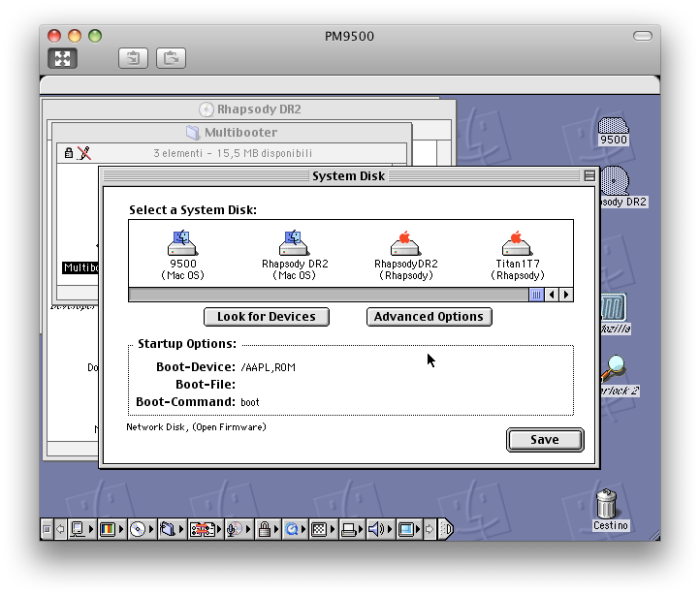 The figure shows the volumes being recognised: 9500 (Mac OS) is the PowerMac internal hard drive; Rhapsody DR2 (Mac OS) and Rhapsody DR2 (Rhapsody) are the two partitions on the Rhapsody CD-ROM, so that it can be mounted by both Mac OS and Rhapsody; and finally Titan1T7 (Rhapsody) is the external 4 GB hard drive, only visible from Multibooter (it’s not mounted on the desktop — and can’t be, for the reasons above). Note how this application/control panel would become the Startup Disk preference pane in Mac OS X, with the same horizontal display of selectable boot volumes.

After selecting the external drive and restarting, I was back into Rhapsody, with the windows opened in the Workspace Manager right where I left them in late 2007. I’ll talk more about Rhapsody another time: I want to reacquaint myself with this operating system first. I guess the next adventure will be about bringing the PowerMac 9500 with Rhapsody to surf the Web by trying to reinstall OmniWeb (yes, OmniWeb has been around for a while now). If that won’t work, well, there’s always Lynx!

3 thoughts on “Adventures in Vintage (part 2)”

Any copyrighted material on these pages is included as "fair use", for the purpose of study, review or critical analysis only, and will be removed at the request of the copyright owner(s).
Loading Comments...
%d bloggers like this: